In the past year, ChainBytes has been working with Lehigh Valley University on a socially responsible project implementing Blockchain technology to solve supply chain issues with coffee bean farming and fair pay for farm workers in El Salvador.

For many years, workers within the coffee bean industry in El Salvador have been left unpaid due to the corruption of the industry, which removed El Salvador from the coffee map of the first world countries and big acquirers who are putting effort to be socially responsible and assure fair pay for farm workers.

Big corporations such as Costco, Walmart, Whole Foods and many more refuse to purchase coffee that is not grown under the fair farming principle. The coffee industry in many parts of the world, the income of workers in the industry depends on the sale of the coffee to the purchase price. If the coffee is not sold, or is sold under a specific price, the workers on the coffee farms often won’t be paid for their work during the season. This brings many workers and their families to poverty and struggles for survival. Due to untrusted 3rd parties, even when coffee was sold the farmers would not be paid. 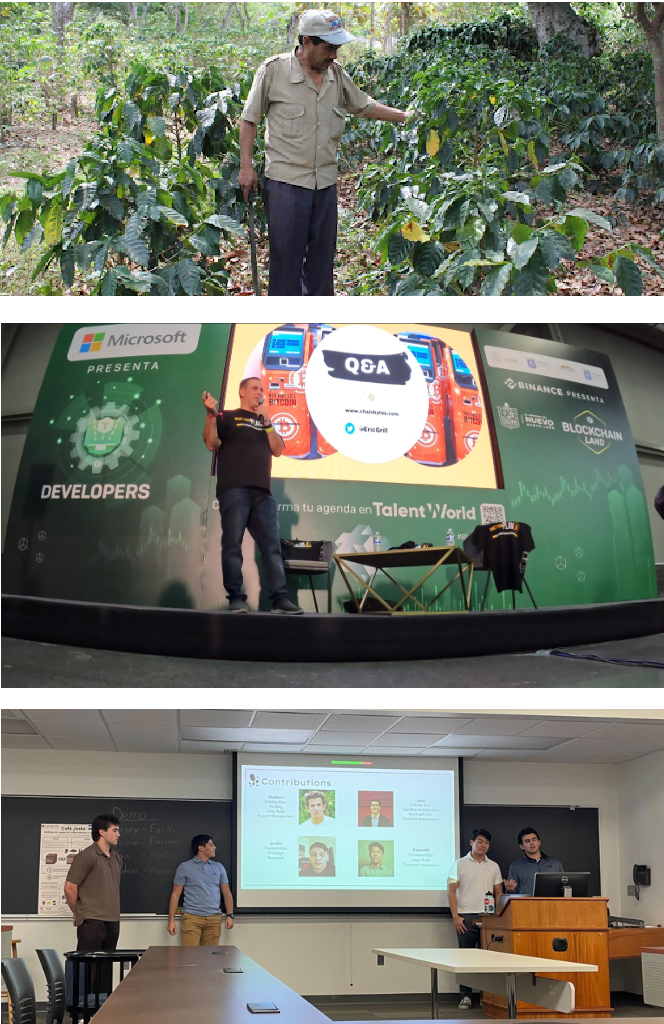 Now, big coffee purchasers need to rely on 3rd parties to give them guarantees that farmers are paid. With current world trends and bringing more awareness of the issue, and the drive to buy only from sources which can assure that farmers get fair pay, in countries like El Salvador the coffee industry came to a halt. Companies  such as Costco, Walmart, Whole Foods do not purchase coffee from El Salvador. Leaving the Coffee industry in El Salvador without major buyers resulting in coffee farms closing and its economy collapsing due to 50% of the country’s revenue coming from the coffee industry. What if there was a way to revive the coffee bean industry in El Salvador by proving workers are being paid properly and fairly? ChainBytes joined the efforts with Lehigh University and together we are creating “coffee Justo” a mobile web application that allows for coffee bean workers in El Salvador to be paid properly and a transparent system for buyers to track payments giving them a full insight into the fair pay principle.

The ChainBytes solution, along with Leigh University

ChainBytes, along with several top-performing students from Lehigh University, are currently building a mobile application called “Coffee Justo” aka Justice Coffee. This application use blockchain technology to fix the relationship between farms, foremen and workers to ensure workers on coffee bean farms in El Salvador are being paid correctly.
The application will enable payment via blockchain transaction to workers assuring correct pay is done. At the same time, the same application for potential buyers (aka big brands) will display the exact status of payment to workers. Ensuring transparent reporting on the status of payments, which is one of the key blockers for big brands to going back to the El Salvador market.

Coffee Justo will be running on the Ethereum network. Ethereum is currently the best network for this operation due to its complex solidity smart contracts, metamask integration as well as react native and WalletConnect. The components for this application are a mobile application for both IOS and Android with a decentralized backend system. Farmers are the owners, they create the foreman and are able to pay workers directly through the Coffee Justo application. The foreman are associated with the farms and are used to be a check-in for coffee bean workers. Coffee Justo will be a way to facilitate the public payment of laborers working on the farms. All check-ins are public and all payments are public. Anyone can see how many times a worker checked-in and how much and or often they were paid. Chainbytes has been working alongside four computer science students from Lehigh University, Joss Duff, Justin Venezia, Kenneth Cho, and Hudson Pavia to bring this application to life and build a transparent system to revive the coffee industry in El Salvador. Below is an explanation of how our “Coffee Justo” application works. 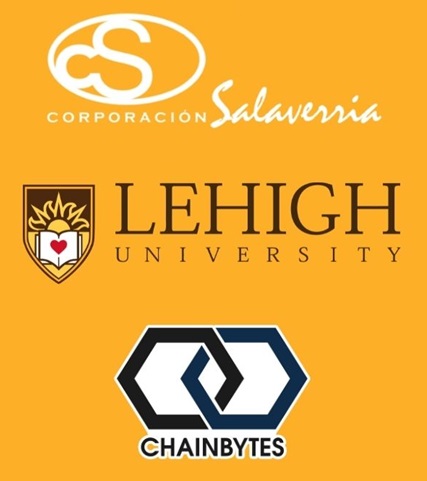 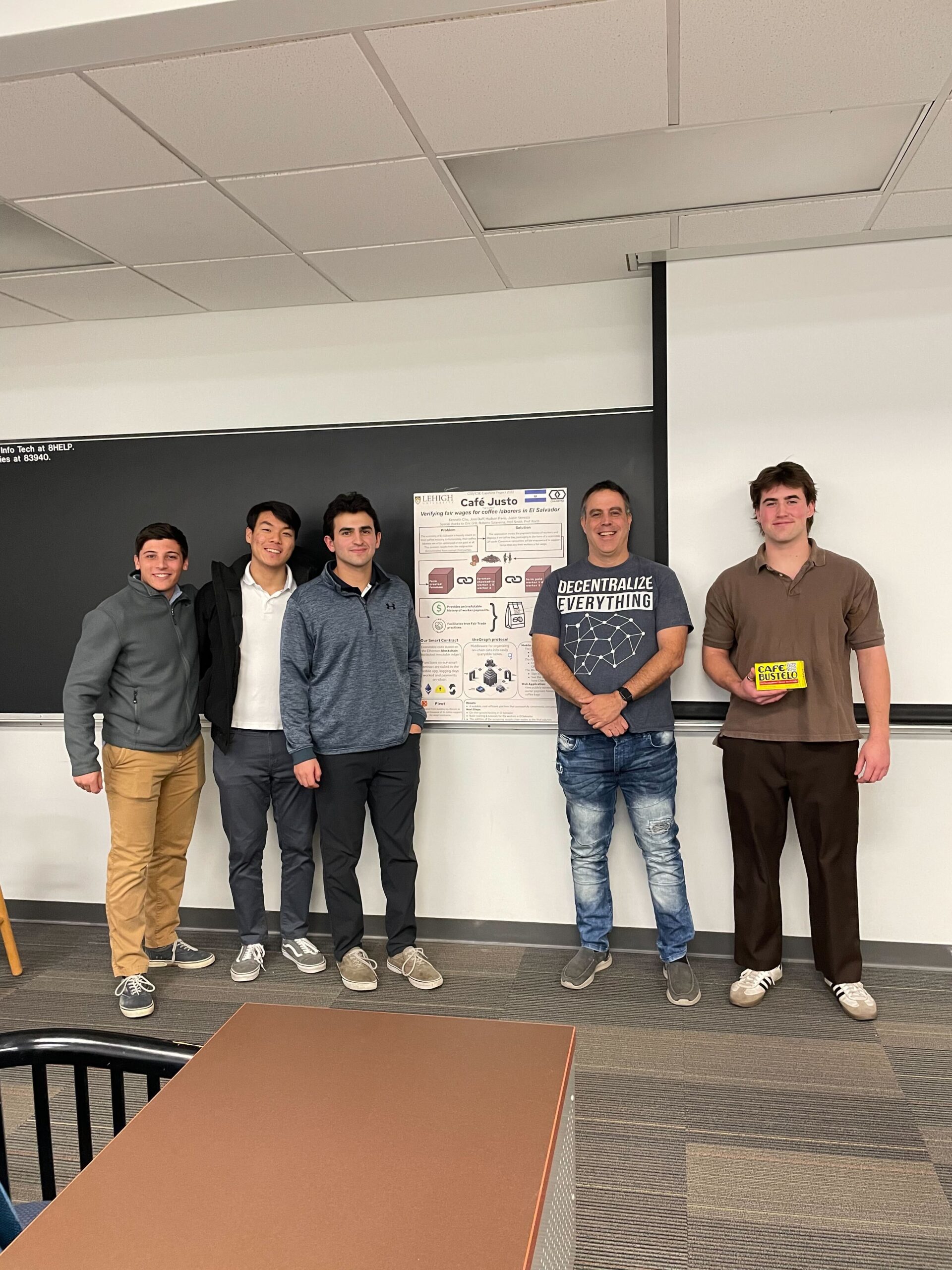 The front-end design of Coffee Justo is focused on functionality and the user interface between the farm and its coffee workers. The application utilizes three roles; farm, admin, and worker. Integrated WalletConnect is used as an authentication method that allows each of the roles on the app to easily access a person’s wallet. This also gives us a provider as well as a signer through WalletConnect to Metamask, Crypto.com, Coinbase.com so the transaction of the funds can be complete. 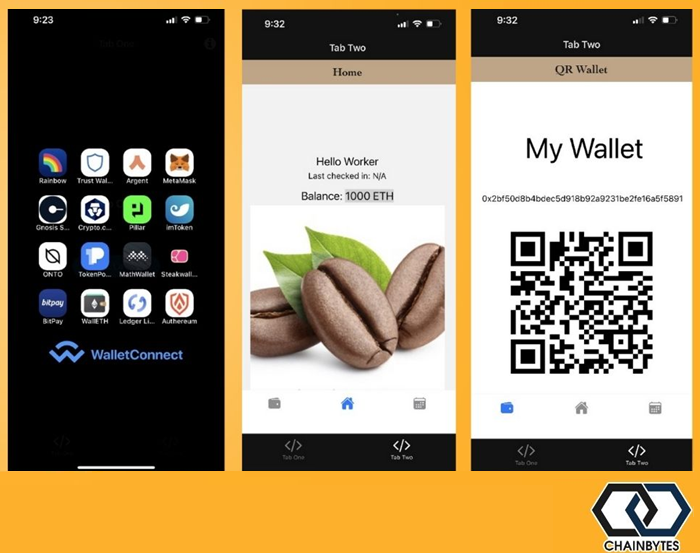 The Back-End The back-end functionality will be theGraph, which allows us to store these relationships in a database based solely off of emitted events for easy querying. This allows the blockchain to do the work for us. This process will be completely decentralized and transparent. Pictured on the right is theGraph and how it works in relation to the other components. 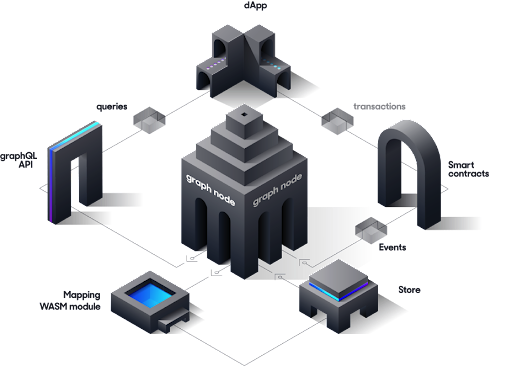 The Future of Coffee Justo

The Coffee Justo project with ChainBytes and Lehigh University will be completed this semester, including a fully-functioning IOS and Android mobile application for coffee farmers and workers to use. The future plans for this project are to create a frontend system for workers that is a payment history when scanning a QR code on a coffee bag at your local grocery store. This will allow customers to see if the workers on the coffee farm were paid for the time they worked to produce that bag of coffee. The ultimate goal for the project is mainstream adoption for supply chain tracking capability and a use case for Blockchain technology across the world. 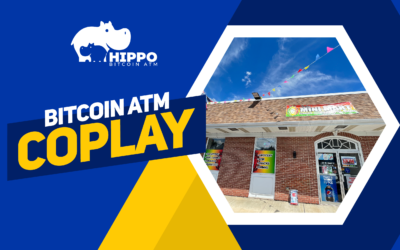 Can you buy Bitcoin in Coplay? Are there Bitcoin ATM’s near me?