Bitcoin on an Exchange or in Your Wallet? 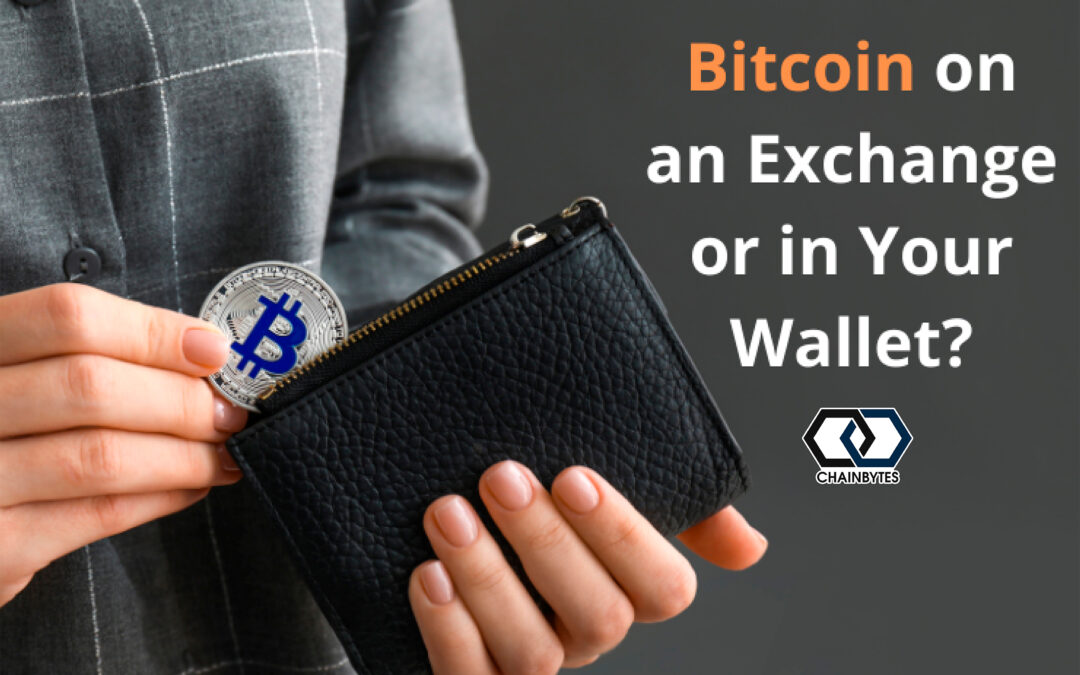 Information provided on this blog post is general in nature and does not represent financial or security advice.

When it comes to holding your cryptocurrency like Bitcoin, the question is whether to keep it on a digital exchange (e.g. Binance, Gemini) or keep it in your digital wallet. It has become a choice based on perspective. Those who prefer to hold Bitcoin in a personal wallet do so because they feel more secure about having possession of their digital asset. Those who hold Bitcoin on an exchange do so for convenience. Many, especially new cryptocurrency holders, are not even aware of the difference.

There are reasons for holding Bitcoin with an exchange or in a personal wallet. In general, wallets are just software that provides you a way to access your Bitcoin. Let’s discuss the benefits and drawbacks.

A wallet in cryptocurrency does not hold the actual Bitcoin. A wallet is software that holds a private key. The private key is what authorizes a user to release funds through their digital wallet to make payments, swap to another cryptocurrency, withdraw all funds, and transfer value. The user’s Bitcoin or BTC is stored as a value in a database called a blockchain. The private key opens access to those funds from the wallet. From the private key, a user’s public address is generated (i.e. Bitcoin address). This is used for receiving Bitcoin from another user.

If Bob wants to send Bitcoin to Alice, he would need to send it to her public address. His private key would then authorize the release of funds from the blockchain to send Alice the amount in Bitcoin. The private key also verifies the Bitcoin owner using a digital signature. This would validate Bob as the owner of the digital signature and can match up with the private key. If it is valid, then it authorizes Bob to send Bitcoin to Alice. Without a private key, Bob would not be able to send any Bitcoin.

Bitcoin On An Exchange

Most people get into cryptocurrency via online on-ramp platforms, which are exchanges. They provide an onboarding mechanism that is legal, and depending on the exchange, it can be user-friendly. It is compliant with regulators so that it meets financial rules and regulations (depends on the country). An exchange provides a custodial wallet to users, which means that the exchange is hosting the wallet for the user. The user is treated as a customer, so this is a service provided by the exchange. It gives users a managed service because all maintenance and administration of the wallet will be conducted by the exchange.

Since the wallet is custodial, the exchange owns the private key of the wallet. All transactions are, therefore, with the authorization of the exchange. This gives the right to the exchange to suspend or deactivate an account, which prevents users from accessing their Bitcoin. This can happen if, for example, the exchange deems a user has violated a policy or guideline. It could be due to an investigation or worse.

Bitcoin In Your Personal Wallet

One of the main ideas behind cryptocurrency was to have financial freedom. This means full custody and ownership of digital assets. What some users do after purchasing their first Bitcoin on an exchange, is to move it to a personal wallet. This wallet is outside of an exchange and is just software that can be installed on the user’s computer or mobile device (e.g. smartphone). The private key to the wallet is granted to the user, so they are in complete control of their Bitcoin.

Other types of personal wallets include hardware wallets and online wallets. The most secure and recommended by crypto influencers are hardware wallets. This is because they are offline and only accessible to the user. Online wallets can be accessed via an app or website. Users who access their wallets via a website will need to practice the most caution because it is open to the public. Using strong passwords and 2FA is highly recommended. All these wallets provide access to a user’s Bitcoin with a private key. This is why users should keep their private key safe and not reveal it to anyone else. Another user can access your Bitcoin if they steal or copy your private key.

Having control of your digital assets means bearing greater responsibility. When a user installs a personal wallet for the first time, they are given what is called a seed phrase. This is a group of words that a user must either write down on a piece of paper (highly recommended) or memorize. The seed phrase is what allows a user to recover their wallet in case something should happen to it (e.g. device got corrupted, lost computer, etc.). This is the only sure way to recover a wallet, so if the seed phrase words are lost, users will not be able to recover their Bitcoin.

It is good to know that Bitcoin is supported by both types of wallets. Perhaps you may have realized that there are times you may want to keep Bitcoin to yourself or put it on an exchange. It makes sense given the purpose for doing so.

Keeping access to your Bitcoin from a personal wallet provides the most control for users. For those who want to HODL, this is a long-term strategy for Bitcoin. Users have complete control of their Bitcoin with full custody. That prevents anyone from confiscating or restricting the use of their digital assets. It is also a safer way to access Bitcoin. Personal wallets are also ideal for making direct payments with Bitcoin to other users, without additional fees paid to exchanges.

A major problem with exchanges is that they can get hacked and a user’s Bitcoins will get stolen. They don’t often compensate users since there are no guarantees exchanges can fully cover hacking incidents. The MT. GOX hacking incident is one reminder of how vulnerable users are when an exchange gets hacked. Exchanges know better now, with more robust cybersecurity policies in practice. They also assist users who have been hacked, including recovering some of the stolen funds (this depends on the exchange’s policy). Just be aware that an exchange can still get hacked and that is one of the risks to know about.

For those who are holding Bitcoin in a personal wallet, take care of your private key. If your private key is exposed, anyone who has the code can use it to access your Bitcoin and perform transactions using your wallet. Also, make sure that the seed phrase is stored somewhere safe in case you need to recover a wallet. In cases where you change your smartphone or computer, if you need to restore a wallet on the new device it will require you to provide the seed phrase. If using a hardware wallet, do not lose it and make a backup in case of an emergency.

For convenience and least responsibility, holding Bitcoin with an exchange is the solution. Many investors who are not as deep into cryptocurrency or technically savvy would probably prefer this custodial relation with exchanges. This is a familiar setup in traditional finance, so it will cater to a certain market. Exchanges also serve as platforms for trading and currency conversions. Since Bitcoin is under the custody of the exchange, it can also control access to it. Thus users have the least amount of control when their Bitcoin is with an exchange.

Users who want more freedom and control can move their Bitcoin to a personal wallet. In that scenario, Bitcoin is under the user’s full custody giving them the greatest amount of responsibility to their Bitcoin. Users can convert Bitcoin to cash using a Bitcoin ATM or send it to an exchange to convert to fiat that can only be deposited into a bank account.

The important thing to remember is that users need to keep keys, passwords, and all access points safe from security risks. Experts are recommending use of strong passwords with 2FA for account access. Keep the seed phrase stored in a secure location and make backup copies of it for good measure. If you use a personal wallet, never share your private key with anyone, especially strangers. Whichever works out best, it is still good to know that you have access to either type of wallet whenever the need arises.

2FA – 2 Factor Authentication is used to provide another layer of security for authenticating user login.

Bitcoin ATM (BTM) – An automated teller machine for Bitcoin and another cryptocurrency that provides converting digital assets to cash.

Cryptocurrency – A class of digital assets, secured through cryptography, that can be used to transfer and store value.

Digital Signature – A code that is linked to the user’s private key that verifies a user’s authenticity.

Digital Wallet – Software that holds a user’s private key which authorizes their access to Bitcoin.

HODL – A term used by cryptocurrency holders that is an acronym for “Hold On for Dear Life”.

Private Key – A unique cryptographic code that provides access to a user’s Bitcoin.

Seed Phrase – A set of words that is used to recover access to a digital wallet.