Bitcoin ATMs: The Future of Cryptocurrencies

What is a Bitcoin ATM?

Bitcoin, the world’s most notorious cryptocurrency and blockchain technology are disrupting almost every industry around the world. A Bitcoin ATM is a kiosk, similar to the traditional banking automated teller machines, which allow users to transact with the new form of currency in an easy convenient way.

On October 29, 2013, former Bitcoin ATM maker Robocoin installed the world’s first Bitcoin ATM at Waves Coffee in downtown Vancouver, Canada. The United States received its first one in early 2014 in New Mexico. About 5 years later, Coin ATM Radar, an online tool that tracks Bitcoin ATMs, shows that the United States is home to most of them with more than 2,000 machines across the country. Recent figures revealed that Bitcoin ATMs around the globe surpassed 4,000 in late 2018.

Installations have experienced almost a 700% growth since 2016; they have grown from 502 in 2016 to over 4,000 presently. According a report published on ResearchandMarkets.com, it is forecasted that the cryptocurrency ATM market will grow to $144.5 million by 2023. 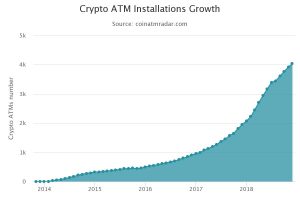 Bitcoin ATMs take fiat currencies (e.g. US dollars) and the Bitcoin equivalent (less any fees) is sent to the user’s digital wallet. More convenient verification procedures and faster transaction times are some of the reasons why they are preferred by many users over online exchanges. Bidirectional or 2 way Bitcoin ATMs that provide the exchange between cryptocurrencies and fiat currency are also available.

Bitcoin ATMs allow users to purchase Bitcoins and other cryptocurrencies directly without any third party intervention and remove the waiting periods associated with depositing or withdrawing funds from online exchanges.

Value Added to the Economy

Currently, Bitcoin ATMs charge an average of 8.66% fee per transaction. However, as the demand for these machines continues to increase, these transactional fees are bound to be reduced.

As their demand grows rapidly, the market for Bitcoin ATMs is set to experience a boom. They will continue to contribute to the cryptocurrency space by simplifying transactions and helping new users enter the ecosystem. Bitcoin ATMs are the future of cryptocurrencies.